First ever guest post on Sacred Symbolic:
Travis Washburn is my brother and a great friend. He has a bachelor’s degree in English, and studied Spanish extensively both in school and on his own. He served an English-speaking mission in the Arizona, Phoenix Mission, then later spent six months in Chile as an exchange student, where he honed his Spanish skills, among other adventures. He is currently working as a graphic designer and technical writer for Xennsoft. He’s also in the process of applying for grad school.

He recently shared with me something he was doing to enhance his scripture study. Just reading the result changed the way I see Alma 2. I’m going to incorporate the method that follows in my own study, and hope you will too. He’s shared with me some other great study material, so you may see more from him in the future.

This is an experimental scripture study. I don’t mean this to be a replacement of the original; I just want to understand the language better. Translating something makes you weigh each word and really think about what is meant. This is especially interesting when you remember that The Book of Mormon wasn’t written in English—the copy we read is a translation.

You might consider reading the actual verses alongside as you go (click here to open Alma Chapter 2 in a new window). I noticed a lot of things about the specific language. For example, although the enemies have “armies”, Alma doesn’t lead “armies”; he leads “his people”. And the Amlicites are fighting “their brethren”, a more serious offense than just fighting an enemy. Tev brought up the point that Joseph Smith must have had an extremely keen understanding of the text because of his translation efforts.

I also noticed Mormon’s role as historian—he copies details that don’t particularly drive the plot, and he repeats details one might initially think to be uninteresting or irrelevant. A careful look shows that the Nephites should have easily been defeated. Yet they miraculously conquer.

This study helped me realize the gravity of what happens. The older language can make being “slain” seem incidental. It’s different when you realize they are talking about being stabbed and murdered by a sword’s edge. And all this bloodshed is to defend freedom.

At the beginning of the fifth year of their reign, some disagreements arose among the people; a cunning man named Amlici, a clever and crafty man, who had the same beliefs as the man who murdered Gideon with the sword (the one who was executed after being tried)… —Using his craftiness, Amlici had gotten many followers; so many that they were a powerful group; and they were trying to have him made king of their nation. This was a shock to the members of the church and to everyone who wasn’t a follower of Amlici; because they knew this could be done by majority vote. And if he gained that vote, being a wicked man, he would take away their religious freedom—and he intended to destroy God’s church.

So the people of the whole nation gathered into separate parties, either for or against Amlici, and they argued a lot back and forth. Then they gathered and cast their votes, and the ballots were laid before the judges. And the votes were against Amlici, so he was not made king.

Those who were against him were very glad; but Amlici riled up his party until they were angry with their opponents. So they united as a group and declared Amlici their king. And then Amlici commanded them to prepare for war against their brothers; and he did this so he could force them to be his subjects. And his people called themselves Almicites; and the rest of the people were called Nephites, or the people of God.

The Nephites knew what the Amlicites were planning, so they prepared to defend themselves. They armed themselves with swords, cimeters, bows, arrows, stones, slings, and all kinds of weapons. And so they were prepared to face to Amlicites. And they made leaders for their armies: captains, higher captains, and chief captains, depending on the numbers they oversaw. And Amlici also armed his men with all kinds of weapons; and he also made rulers and leaders in his army, so they could be led to war against their brothers.

The Amlicites arrived at Amnihu Hill, which was east of the Sidon River (which ran next to Zarahemla), and there they engaged the Nephites in battle. Alma (the chief judge and governor of the nation) went at the head his people and his armies, with his captains and chief captains, to battle the Amlicites. And they began to kill the Amlicites on the hill. But the Amlicites fought back with great strength, and many of the Nephites were killed too. But the Lord made the Nephites stronger, and they killed so many Amlicites that they began to run away.

So the Nephites chased them the whole day, and killed a large number of them, 12,532 in total; and 6,562 Nephites were killed.

And when the Nephites couldn’t chase any longer, Alma had his people pitch their tents in the Gideon Valley (it was named Gideon after the man who was stabbed to death by Nehor). And they camped there for the night.

And Alma sent spies to follow the rest of the Amlicites, so he could know their plans and plots in order to guard and protect his people. The spies Alma sent were named Zeram, Amnor, Manti, and Limher; they were the ones who took their men to watch the Almlicites’ camp. And they returned in the morning to the Nephite camp quickly, surprised and afraid, and they said, “We followed the camp of the Amlicites, and to our surprise, in the land of Minon above Zarahemla (on the way to the land of Nephi), we saw a huge army of Lamanites; and the Amlicites have joined them. And together they are attacking our brothers there! And our brothers are running away with their animals and families toward our city; and if we don’t hurry, they’ll take over our city, and our parents and wives and children will be murdered!”

So the Nephite people packed up their tents and left the Gideon valley headed toward their home, Zarahemla City.

And as they were crossing the Sidon River, the Lamanites and Amlicites flooded down on them—and there were so many of them it was like the number of grains of sand on a beach. In spite of that, the Nephites were strengthened by God—after praying with all their hearts that he would save them from their enemies, God heard their prayers and gave them strength, and the Lamanites and Amlicites gave way as the Nephites attacked.

And then Alma and Amlici fought one on one (with their swords); and it was an mighty fight. And then Alma, because he was a man of God, used his faith, and prayed: “O Lord, have mercy and spare my life, so I can be your weapon that saves these people.” And after he prayed these words, he continued to fight Amlici; and he was stronger, so much stronger that he killed Amlici with his sword.

And this is how he cleared the west bank of the Sidon River, throwing the dead Lamanites’ bodies into the river, so that his people could have room to cross and keep fighting on the west side.

And when the Nephites had all crossed the river, the Lamanites and Amlicites began to run away, even though there were so many of them that they couldn’t be counted. And they ran toward the jungles on the northwest, outside their lands’ borders; and the Nephites came after them in their strength, and killed them.

And the Lamanites and Amlicites were attacked on every side, killed and chased, until they were scattered to the north and to the west, and scattered into the Hermounts jungle—a jungle full of wild and ferocious animals. And many of them died in the jungle because they were wounded, and they were eaten by the ferocious animals and by vultures; and their bones were found later and piled into heaps on the ground. 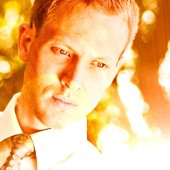 The Most Important Chapters in Scripture? Part: 3

The Most Important Chapters in Scripture? Part: 1

The Things the Book of Mormon Leaves Out

Every poet and musician and artist, but for Grace, is drawn away from love of the thing he tells to love of the telling till, down in Deep Hell, they cannot be interested in God at all but only in what they say about Him.